Wiener Dogs Are No. 1 For Many Folks 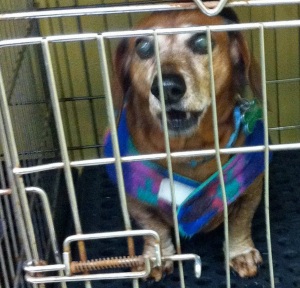 Jake, unhappy while waiting his turn for grooming and unhappy about being number eight.

Whenever we are out in public with the furkids, the wiener dogs always make people smile.

Is it because dachshunds are so long, lean and low? Is it because of the spring in their steps? Or is it because Jake and Windy are always good humored?

Whatever the reason, I like it when people smile, but these smiles don’t necessarily translate into dachshunds being the number-one breed in America.

The American Kennel Club released this week its popular dogs rankings for the year. And, once again, Labrador retrievers were number one. The labs have clenched this spot for the last decade. Dachshunds were number eight, and miniature schnauzers were number 12. (Sorry, Hope.)

Pity the poor English foxhound, which ranked last at 167.

To see where your favorite breed is check http://www.akc.org/reg/dogreg_stats.cfm

I have owned dogs nearly all my life. Many different breeds, mutts, rescues, and foundlings have found their ways into my heart. I have two dachshunds and a miniature schnauzer now. I hate puppy mills and want them wiped from the face of the earth.
View all posts by daysofourdogs →
This entry was posted in Dachshunds, Schnauzers and tagged American Kennel Club, Dachshunds, Schnauzers. Bookmark the permalink.