Doggie Tonsillitis, Strep Throat, Or What?

Posted on March 8, 2011 by daysofourdogs 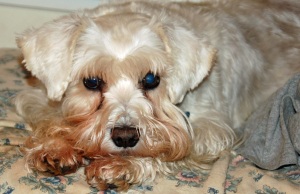 Hope could take first place in the Olympic snoring competition.

Last week Hope started snoring like a chainsaw. I’ve had dogs snore before, so I wasn’t concerned.

A few days after the snoring began she was making sounds from her throat—the kind of sounds you make when you have a sore throat. I called the veterinarian.

Hope’s tonsils were inflamed, and she had had a fever of 103. A normal temperature for a dog is 101.

It has been a few days and she is perkier but still snoring like a chainsaw. The real challenge has been the pill.

Peanut butter saved us. We chop the pill in little pieces then stick it in the middle of a gob of peanut butter. We do this several times at morning and night. It is a slow process, but she eats it all.

With the continued snoring a concern, we went back to the vet yesterday. Her tonsils were no longer red, but Hope got a shot of depo-medrol to help with her enlarged tonsils.

Today Windy started feeling lethargic. I have a sneaky suspicion we have something communicable here and may be back to the vet tomorrow. I am watching Windy closely.

I have owned dogs nearly all my life. Many different breeds, mutts, rescues, and foundlings have found their ways into my heart. I have two dachshunds and a miniature schnauzer now. I hate puppy mills and want them wiped from the face of the earth.
View all posts by daysofourdogs →
This entry was posted in Dog Health, Medicine, Schnauzers and tagged dog health, medicine, Schnauzers. Bookmark the permalink.